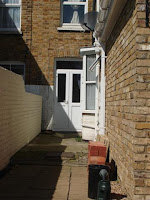 This morning the work has started on tidying up my garden. I'm having the side bit completely paved, the manky wall rendered, the tree stump removed and the raised bit with the shed on paved.

When I moved in there was a massive metal shed and a conifer, both of which dominated the garden, so they were removed. Dad painted one wall, but the other one was too far gone to be saved. 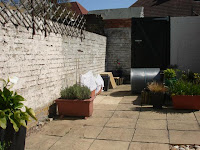 I'm really lucky that I have the sole use of the back garden and with it all being paved there's no grass to cut so it's very low maintenance.

I grow veggies and salad bits in the pots so there's no digging and minimal weeding. The only trouble is the local cats have a habit of digging in the pots, so we've got net over them at the mo to try and prevent it.

On this last pic you can see the doors I had put in last year. There was just a window before and the garden access was through my bedroom so when I was in the garden and needed a drink, I had to walk all the way up then back down to the kitchen, which isn't a problem if you're ok, but it was knackering. The doors have meant I spend longer in the garden and have transformed the back room which is now a craft room whoo!! 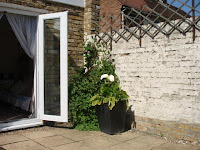 I'll go along with that, don't want anything to get in the way of crafting eh!!

Kaz, when you've got you garden sorted out, maybe you'd like to pop along here and have a go at ours....

hehe, that craft room is the danglies :) I could do with a garden like that no mowing!!

So where is the rabbit hutch, for ur rabbit ?