We've had a busy month for swaps on Bubblyfunk Forum in May which I think accounts for some of us disappearing to lala land. It's been fun though and I've learnt some new stuff like the notebook project. 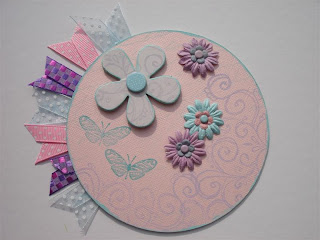 Another thing was an altered CD swap, which is just what it sounds like, you decorate a cd. The topic for this was Collage and I decided to do a stamped collage, but me being me hadn't checked until I needed the address to send it to, and then discovered it should have been a collage of papers and then decorated. Whoops! I've sent it anyway after doing all the masks for the stamps. 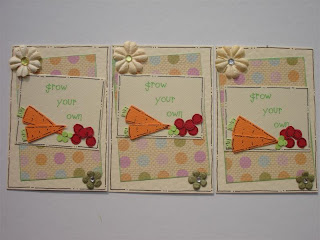 The ATC theme was healthy living this month and I've had a blank on it for so long. In the end I thought I'd do some veggies and thought it would be a quickie, but ended up with tomatoes and peas sticking to my fingers instead of the card (yes that's what the green and red things are). I did all 9 the same as I just couldn't think of anything else. 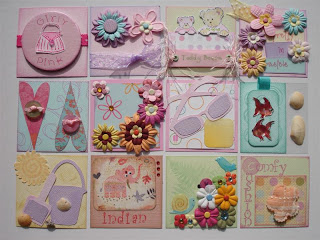 The last swap was the Maze Book swap where we make 12 6x6cms squares with different themes, chosen by 12 people. Some are going to put them in frames and others are putting them in books, which I'm going to do once I get round to making it, it's on my to do list, which doesn't seem to get shorter!

Hey Kaz! You're not the only one stumped by the ATC's this month hun! But what a fab job you've made of yours!

Loving the Maze book swaps - they are all beautiful, can't wait to get my seaside one from you!

Hello, thanks for stopping by my blog :O)

These little treasures are gorgeous and I love your patio/backyard area in the post below too,
melx

wow kaz, All your projects are so pretty - and boy, have you been a busy girlie!