The dare for this week over on DCM is
'we'd like you to make and show a Christmas card which incorporates the following:
Some Paper Tearing
The colour Purple
AND
It has to have at least one hole somewhere in the design!'

but then hole has to be something other than holes for brads etc. I have to admit it stumped me at first and it was only when I was tidying up the cards I'd made for SCS, that I realised I'd already done one, but without the paper tearing. Anything for an easy life, I did another similar one. I'm not sure about it myself though as I think the purple paper, nice though it is, is too much over the whole card. 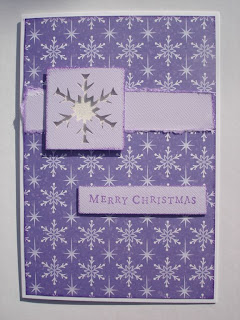 The paper is a couple of years old now so I'm not sure where it came from. The hole is the bit left from a snowflake punch and you can't see it on here but there's white glitter card underneath the hole. I've stuck it with silicone glue to give a lift so it looks like a hole! I've torn the bazzill with a ruler as it was a bit wayward without it!!
Posted by Kaz at 16:37

This is really pretty Kaz, I love the way you've used the snowflake "hole"!

Snap on the snowflake punch - your version is lovely! Isn't it satisfying to use up old paper -then you can buy more....;-)
Ros

Really lovely card, Kaz, AND you managed all 3!

Awesome card, Kaz.
I think Snowflakes are to me the best symbol of Xmas. I just love to see them on cards.

Very pretty card, I had problems tearing too!

This is lovely! love that snowflake punch too, what a great card!

Lovely card! I like the large snowflake stamp hole!

Lovely card, the paper is great

I love your choice of colours and the snowflake hole. A lovely card!

This is gorgeous!! I love how you've mad the hole.

Lovely card, the snowflake looks great with the glitter behind it.