This weeks DCM is to use an animal on your card, which gave me the excuse to finally use a stamp I bought ages ago in a sale. I have had no way of using it yet as its a cow but I really liked the look it's got, a bit like 'so.....?'

I combined it with Di Hickman's October card sketch #2 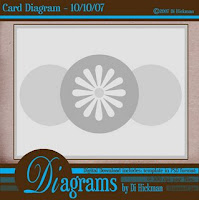 I know I'll be using this sketch again in the future as it's so flexible and simple (no comments thanks Rosie)! 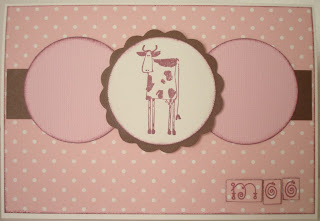 The papers are American Crafts double sided, the cow stamp doesn't have a label on it for some reason and the letters are stamps away.

I've also been making some mens cards as I have two this week and as they're family I have to make them for mum and nan to give as well as myself, so I've used sketches for inspiration.
This card uses this weeks sketch at CPS 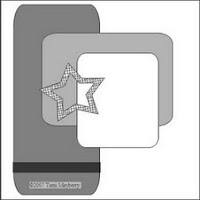 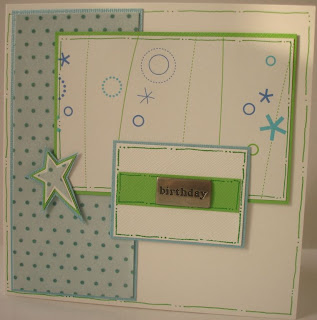 I used more of the velvet paper from the kit (and I've still got some left), doodlebug patterned paper and bazzill card. The 'birthday' came from Lakeland in the sale (you know me and bargains). I only have a small star punch so I've done layers to make it bigger, and I've added some doodling as I've not done that for a while.
I'll blog the others when I've finished them.
Jenny came round yesterday to clean for me, and has done me proud. It turns out she makes cards too, as does somebody who lives opposite me, which is a result as we can swap stuff (I've already got one of her stamps)! It couldn't have worked out better!
Posted by Kaz at 16:35

great cards you have made for the sketches :)

Fab cards! The pink and the cow go so great!

HOw cool to find so many cardy types nearby! I love your cards - speshly the animal one but I guess I would say that!

fab cards Kaz, I love the cow it's so cute

very cool! Love the cow one, I have that stamp! Remind me and I'll check if mine has a label on in. TFS!

I love your card! I love the patterns and how you balanced the elements together. Fabulous job!

I just love all these cute cow cards!
Love that spotty vlevet paper one too - though still not sure how you could bear to use it!

Love both the cards..I have never used sketches but you have inspired me

Love these cards (and the let is snow one below). The Di Hickman sketch one is really cute.

Fab cards, love pink and brown together and your card using the CPS sketch is great, love the doodling!

Gorgeous animal card. I have this stamp & I love how you have used it. The papers are gorgeous.

Gorgeous cards Kaz! I would never be so rude to call you simple darling (honest!) ;-)

I was totally mooooo-ved to comment (sorry!) but I just love your cow card. :oD

Great cards, and how fab to have so many other crafters so close!

Great card. Thanks for joining in.