On Saturday we had a cyber crop over on bubblyfunk forum with different projects every hour and then the funniest game of bingo in the chat room in the evening. Thanks to everyone involved for the hard work setting it all up.

I made 2 things on the day and have saved the projects to make at a later date after Christmas. This was the first thing I made: 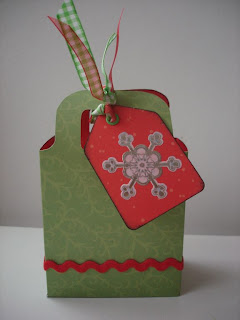 It was really simple to make using a template so I'll definately make more of these as they're the perfect size for small gifts like jewellery.

Then later on a made this: 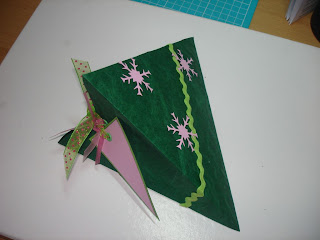 It took a while for me to work out how to put it together (and thankfully Kathy had the same trouble I did so I didn't feel too thick)!! I thought I was dead clever when I'd done it and made a triangular tag, only then I realised I had made a huge mistake. Instead of leaving one side unstuck to allow putting something in it, I'd glued them both together - stupid!!

Yesterday I finished the first monkey for a Christmas pressie and here he is getting to know Wonkey: 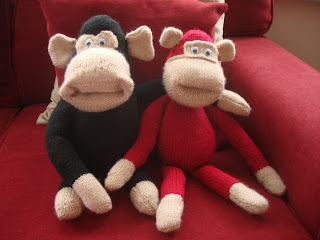 hhhmmm they seem to be getting a bit cosy!! Once I'd sewn him together, turned him the right way round and stuffed him, his body was a bit twisted and I couldn't get him straight. I thought I'd sewn him carefully but I'm obviously the wonky one. I've never been conventional! Tony has named him Twisty for now until he gets renamed by his new owner at Christmas.
Posted by Kaz at 14:08

oh Kaz I *heart* the monkeys so clever x

Hi Twisty!! That pair do look very cosy indeed .... I wonder if you'll be able to part with him at Christmas?

The little gift bag is fab too :)

Aw Twisty is really cute Kaz, he looks like Wonkey's little brother! Journals are lovely too.