Over on her blog, Monkee Maker has a new addition, who she says was inspired by Wonkey.(aaww how good is that)? The lads here were keen to have a nosey at the new fella. 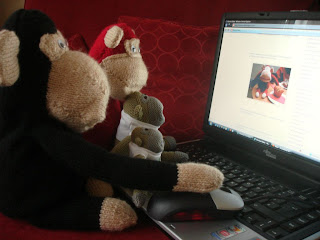 But after close examination, the little one was left wondering if perhaps the newbie was the result of the big guys drunken antics a while back, after all they have been a bit cosy since they met and HP? is a weird combination of both. 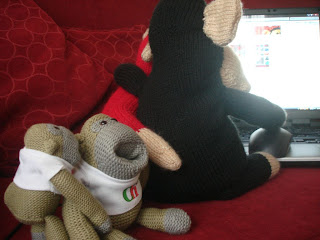 Not being one to gossip, I've kept the speculation to myself.

In other news, I've been making canvases with the material remnant I picked up in Dunelm Mill a couple of weeks ago. There was so much of it, I was able to get rid of my beady ones that I was never happy with and cover 2 for me and a large one for Lynne for Christmas, and still have enough spare to make cushion covers. Well that's the theory, although I'm not quite sure if they'll be done for Christmas as I've still got lots of gifts to make and time is running out!! 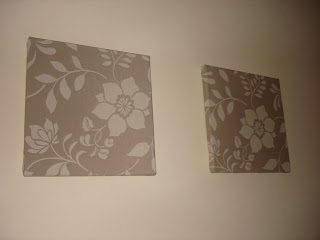 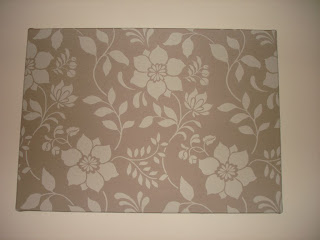 I don't know, those monkees are up to all the tricks - and so computer literate too...ha ha ha, nice one Kaz.

I do hope the monkeys are buying your christmas presents on line LOL,
i had to wait till my little girl was in bed before i could come and see you ,you know how why LOL,
she still wants a red monkey ,Dawnx

That thought about the monkeys? ..... *shudder*

Your canvases are GORGEOUS - what a brilliant idea .... yet another one that inspires me, thanks for that!

Hi Kaz ,Thats so kind of you to offer ,but only when you get time ,and even if its a tiny tiny one that would be wounderful ,let me know when you want the pennies ,
huge thank you Dawn + Alexx xxxxx

Norty wonkeys! LOL Hope they didn't start searching rude sites on the internet when your back was turned Kaz!

The canvases are lovely hun x