I've had a bit of an odd week this week where I've had a couple of days of not going online, which is unheard of in these parts. And I went to the other side of Kent to see my eldest niece in her school play, The Sound of Music, and spent the evening curled up on my sister's sofa doing the ME shiver and shake while everyone else went out!

So there's been no card making to show, but I have done a couple of books for pressies. Mum's got her birthday soon, so true to this year's form, I'm giving her a notebook (plus another gift, I'm not that stingey). My friend Helen's b'day is in January so she missed out on a book as I started them later in the year, so she will have one for Christmas instead. Mind you, she's having something very special for Christmas this year as her baby is due on the 13th!! 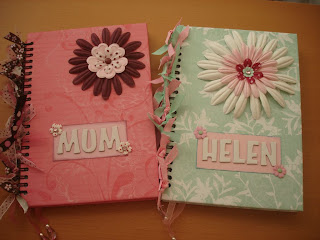 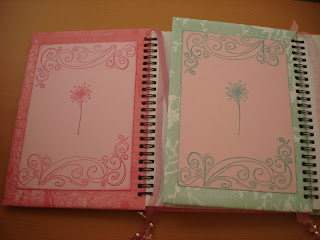 Both papers are by autumn leaves, as are the swirl stamps, which has to be my fave purchase of the year. The flowers are by prima, ribbons by ribbon oasis and the letters are by American crafts. The flower stamp on the inside is from onefourseven. I ran out of the green ribbon so I had to buy some more and oddly enough some other bits seemed to have sneaked into my basket!

We're doing a secret santa swap on Bubblyfunk, so here is a sneak peek of the one I'm sending. It's either a diary, address book or notebook and as usual I've used big blooms. 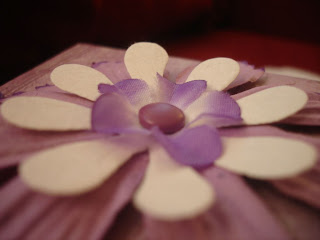 Those notebooks are lovely Kaz, really pretty! I'm sure your mum and Helen will be pleased as punch with them (although it may take Helen a while to realise it if baby has arrived and is doing the usual baby sleep patterns!).

The notebooks are lovely Kaz.....
and you made some fab stuff from the CyberCrop too!