Last night I had to format my laptop as it's been playing up for a while, even though it's only 6 months old. I'm just hoping I've sorted it after spending hours doing updates and putting folders and files back on it. If not, it'll have to go to the drs and I'm not sure how I'd cope without it!!
Still there were good things arriving every time the doorbell rang today which was a bonus. One of the rings was my nieces which is naturally the best thing. Rach sat with me until she went out with grandad to get cakes and Lucy busied herself in the craft room with some bits I gave her. And some more that I hadn't!!
The postman brought me two things that brought a smile to my face. Firstly this scrummy card from Lesley who won the blog candy. I had the same paper in two shades of pink, but I'd have had some in green if I'd seen it!! You've got lovely writing Lesley, I'm not brave enough to write on the front of mine! 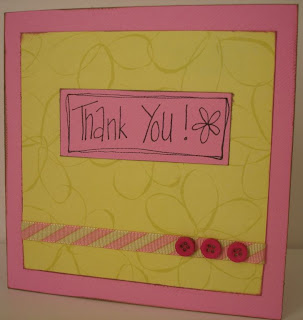 The other bits he brought were these two die sets: 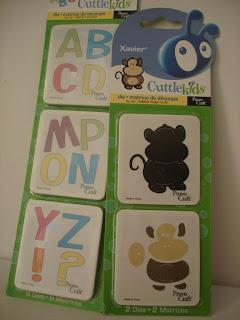 The alphabets are sooo much cheaper than the usual dies as they are thinner and have plastic cases around the metal cutting bit, but cut just as well. All it needs is the thin die adapter. I got them off ebay of course! I had a play and made this: 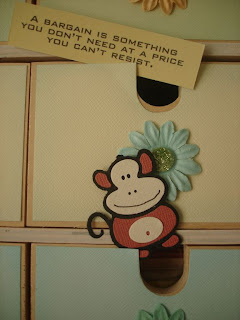 I had to, didn't I?!! I am, however, concerned that he has no arms!!
The final ding dong was the lovely courier who brings me my shopping!! Today she brought me these: 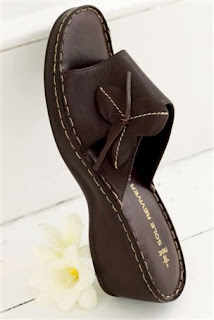 I used to be a bit of an Imelda Marcos when I was well, shoes were my thing (I think crafty stuff has replaced them as my obsession), but now I don't walk enough to wear shoes out. Which is a tragedy. However I decided to treat myself to these scrummies and bugger the fact that I've still got some decent mules. They have got veeerrrrrrrry soft bits, so it's medicinal isn't it?!!

Whered'ya get those shoes Kaz? Want a pair!

Have you seen the Cuttlekids Zebra die? He's a cutie like the lil' monkey too!

Lovely goodies Kaz - I've had a card from Lesley too and it was gorgeous!

I love your die cuts and I agree about the monkey arms! I'm glad you liked the card - it was lovely to play with paper again - and you had that in pink? I'd have bought that!!!

I love those shoes - please tell us where they're from!