Thank you all for leaving me so many lovely comments after my last post, every single one meant so much to me, even Tony's one about giving the dog gravy! It's his dog Tess in my profile pic.

I was upset the day of the interview as I couldn't believe anyone could be so cruel as to make such a serious allegation about me, obviously knowing it wasn't true and that I would face an interview at the very least as a result.

However, when I woke up on Friday, I thought to myself 'well that was yesterday and it's in the past' so I am carrying on as normal. Well as near to normal as I've ever been!! And I think a lot of it has to do with the fact that the guy interviewing me was so kind throughout.

I did wonder if maybe I should clarify what happens when I make something, about how I do it in small stages and take lots of rests in between, but I thought that I don't need to justify my hobby to anybody.

I purposely don't mention the ME and how it affects me as, to be perfectly honest, it's very dull and is only part of who I am. I am still the same dopey, silly person inside, it's just that my brain and body don't quite work right, but hey, who wants to be normal?! I'm sure if I was to go on about it, people would stop reading the blog. I know I have avoided some people I've met with it purely on the basis that I live with it and don't need to go on about it all the time. If however anybody wanted to ask questions I'd be perfectly willing to answer them.

I'm at my sister's today as Rach has gone to her first gig in London with some friends. My BIL and 2 other parents were going too, but one of them is ill, so Lynne's gone and my parents and I are looking after Lucy. It's a group called Paramore and it's at Brixton academy, aaahhh I remember seeing the Smiths there back in 86 (how bloody old am i?) We on the other hand have apple pie in the oven, half a bar of dairy milk (which I am planning to hijack and hide where I'm sleeping tonight) and flushed away to watch, which is a favourite film here.

I am sooo missing my laptop! I was so knackered yesterday that I had a sofa day and it was awful not going online!! I should think ebay has noticed my absence by now!!
I was awarded this the other day by the lovely Jane and I would like to spread the love to all my blog buddies, especially those who took the trouble to post me a comment after Thursday. Rosie kindly called and read them out to me, along with the ones on Bubblyfunk forum. I was choked at the kindness of you all - except for the person who made the allegations!!!! Does that count as slander does anyone know?!!! 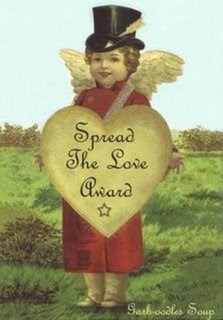 I hope you have a lovely weekend with your family Kaz. I'm very impressed that you have decided to put Thursday's experience behind you and get on with the good stuff.
Enjoy the chcolate midnight feast and I hope you get your laptop back very soon!!!

I meant chocolate of course!!!!

Hope you have a good weekend and don't get too tired, Chocolate yum! i've not seen flushed away yet but the trailers looked good. i'm off to Amazon to see if i can get a copy hugs Jane x

Kaz, I'm really proud to say that you are a friend honey!

Two fingers up to the idiot who tried in vain to cause you trouble. It's just sad that they unfortunately did manage to cause you anguish.

Thanks for the gorgous birthday card you made me (for which you received NO payment! :rofl:)

Sounds like a perfect Saturday! Glad to hear you're putting all that horrible stuff behind you. Roll on getting the laptop back!

take care, I know what it's like. I am fortunate in that I can walk for 30 mins a day, but 40 mins lays me up for a week so I'm far from well, despite how I look. Thinking of you and sending hugs. annie x

Lots of 'get well' wishes for your laptop - can't imagine life without mine :-O I'm so glad you're thinking positively - take care of yourself. x