There's a new guy in town

that is if you live north of the border. I had a text at lunchtime from Janette telling me to go check my e-mail inbox, which could only mean one thing: she's finished her furry friend! He can be viewed HERE on Janette's blog.

The e-mail contained a photo and this warning :

Not a word, do you hear me!!!! Check out my blog for the full story and oh yes if I were you I would go pee first

but it was too late I'd seen the photo.

There have been numerous phone calls over the last few weeks whilst knitting has been in progress - and I have to say Janette hasn't knitted for years and her first project was a hairy one so in at the deep end - that go along these lines:

me: hysterical laughter. what am I laughing at?

Janette: he's at the plastic surgeon's as I had an accident with the scissors


And text messages saying: I think he's mute, I've sewn the mouth together.


The worst was 'the' phone call to try and explain sewing the front, back and gusset - and yes there have been numerous comments of 'your gusset is bigger than mine' - two people on a bad ME confusion day and 3 bits of hairy monkee do not make a successful conversation. I was pointing at Mr H and wondering why Janette wasn't getting it, and there was a lot of silence followed by hysterics.

I really think only those who have knitted one of these monkees can truly understand how bloody fiddly the whole thing is. Tracey over on bubblyfunk forum also had the same trouble when she sewed hers up. There are a few monkees on people's to do lists on the forum, so the army is growing.

I really can't take the piss though, as you've all seen poor Twisty, my first attempt. Anyway, we like different. Here he is in all his glory with Mr H and the WIP who is armless and legless, but I've stuck the eyes on and he now keeps looking at me as if to say 'knit faster woman' 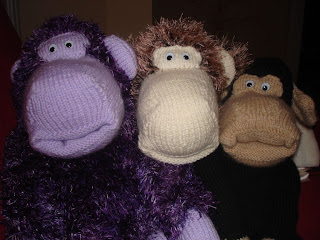 You made me laugh Kaz. Bl88dy monkees why do they have to have a gusset anyway. LOL

I'm not sure I want to attempt another one just yet - the memory of trying to figure out which parts join is still to fresh in my memory. LOL

I do love the hairy monkees though. You are brave doing these Kaz.

The hairy ones are looking fab! And Twisty looks characterful, I reckon :o) I'll go check out Janette's version...

I checked out Janette's monkey ... what's the matter with him? Seriously, I don't think I could make one - I'm not even brave enough to try to make one - though I did get as far as downloading the pattern.

Maybe one day I'll give it a go, but until then I'm happy looking at everyone else's gussets ;-)

You do make me laugh!! I can just imagine the conversation - I've had many like that myself LOL

I presume when you say "the worst was" you really meant "the best".
Talking to you on the phone should come with a health warning " could cause serious lack of oxygen to the brain" And I don't believe you didn't know what you were laughing at, it was as clear as a gusset to me:)
Bug Hugs

Kax, how rude are you about Janette's monkee? Have you seen poor twisty recently? LOL

Very funny post Kaz and yet the monkees look lovely and cute. It did make me giggle though Jane x

Oh man you kill me!!

I've just sniggered like a teenager at your monkeying about! I totally get what you are saying. These monkeys each have a personality of their own.
Minx's fluffy monkey was a pig to knit and now has the longest face ever! Monster's boring brown normal wool one looks quite 'normal'!

I swear I will never ever ever knit a fluffy one again - b***dy thing!!