This morning the postie brought me a parcel that I wasn't expecting and what a lovely surprise it was too. I was lucky enough to be among the 3 first comments on {Lesley Moogsmum's} blog for a PIF a little while back and it was this that arrived. Luckily it was a lovely sunny morning so I took the goodies outside to examine them!!


First of all there was this birdie plaque, yes she made this and its scrummy and is now on my desk so I can admire it. 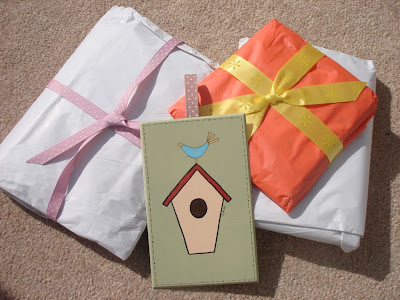 The first package I opened contained a flake mmmmmmmmmmmmm, which I'm savouring and eating a bit at a time. Under normal circumstances it would have been gone in about 10 seconds, but today is weigh in day and I lost 1lb, so I'm feeling virtuous!! It also contained a notebook with a gorgeous touchie feelie cover that has been stroked loads! 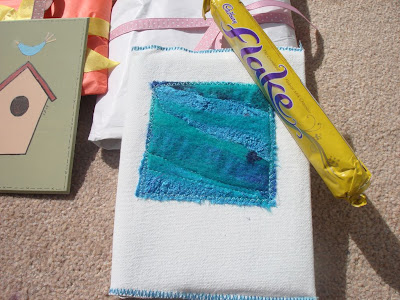 The next parcel was this yummy basket that has inspired me to have a bash at applique. Well I've added it to the 'things I want to try, but I've got to get ............... done first' list, which is second only to my 'to do with a deadline' list, which would actually get smaller if people stopped having birthdays and I didn't have an afternoon snooze! I have already put this to use by putting my threads in it to help tidy up my fabricky stash. 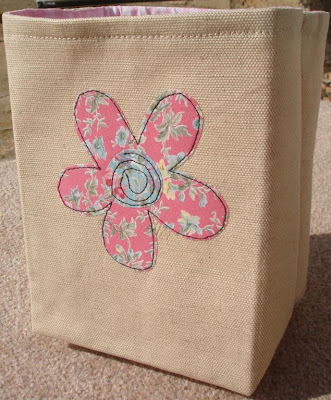 The last parcel had a little something extra to the PIF as Lesley said she'd meant to send it when I was laptopless, which really touched me that I too have imaginary/real friends in blogland who want to do nice things to make you feel better. It's a lovely purse that had a spool of ribbon in it. And we all know how much I like ribbon! There is a link to a tutorial on Lesley's blog on how to make one of these purses and, yes, it's on my 'to do' list already so now I have something to compare mine too!! 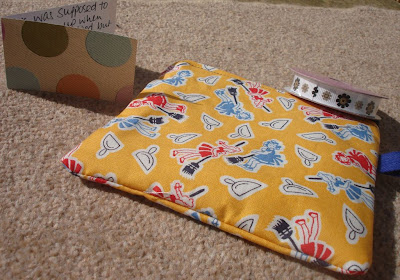 The ribbon was put with my other bits, and look, the pink spotty ribbon used to wrap one of the parcels is a shade that I don't have!!! Ok so it's not that clear, but the sun had gone into hiding by the time I stopped stroking the goodies.

So, as its a PIF, I now have to make something for three other people. If you are one of the first three people to leave a comment on this post, you are one of the lucky ones!! I haven't a clue what to make, but I'll have a think about it. 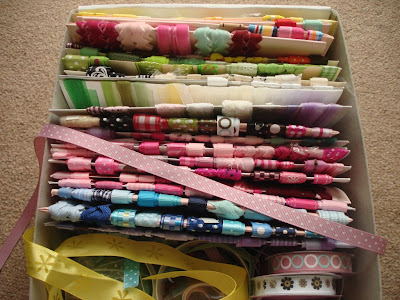 Here's a couple of things I've been doing this week. I made this bag with the idea that I'd either put it in the coffee morning or give it as a present, but I'm keeping it myself! I got the material on ebay a while back. 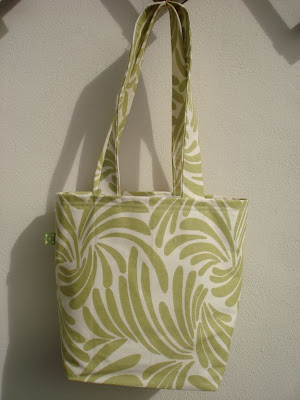 There's a couple of 70th birthdays this month, one of which is Sheila (see below) whose wedding anniversary we celebrated on the weekend. She doesn't look her age does she? Well I think not anyway.

I used the sketch on {CPS} and did two versions and as they're done in pastel shades they will fit in with {DCM's} little extra which is an easy one to use pastel colours. 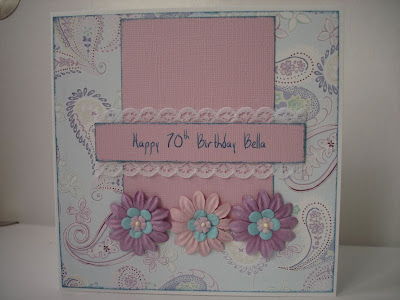 This was done using a scrap of paper that I think is by Karen Neubeurger, with flowers from my stash. 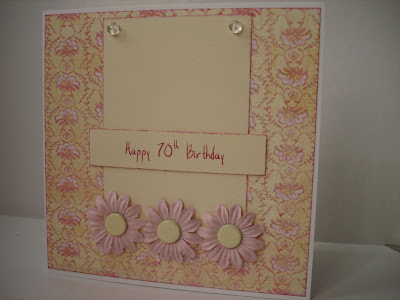 This one is using some basic grey two scoops paper and flowers and brads from stash.

That's it now, lengthy post finished at last, so if you're still awake, get posting to be in the 3 that get a PIF.

I got to you via Monkee Maker from the Stash Basket. What great crafting you do. I am just getting back into crafty things and Blogs like yours are really inspirational. Thank you. I don't have a blog but could email you my email.

Oh no, I'm doing it all wrong... weight in day is my treat day and I would have stuffed it down packet and all in one go!

Rosie says you make gorgeous stuff, but she was understating. That bag is scrummy!!! And your cards are stunning I love love love it all.

(You've put me to shame on cardmaking and weight I'm afraid!)

Oh no, I am too late to join the PIF, but not to late in joining in and saying your crafting is to drool over. Love the bag and the cards are so special.

Ooh that Lesley, she puts together a really good package, doesn't she? Mind you, I reckon the people who have signed up for your PIF are in for a treat too.

Another lovely bag and cards - and you make those pesky hairy monkees too - how do you do it??

So glad you liked your parcel Kaz. I really enjoyed putting it together for you :)

I am totally in awe of how beautifully organised your ribbons are!

Your bag is just beautiful - I love that fabric and think you should most definately keep it!

As always, very lovely cards and the colours are gorgeous - I'm sure their recipients will be thrilled :)

These are lovely Kaz, nice to get a parcel full of inspirational goodies. I will go and look at Lesley's blog for some inspiration, never know what I might make!

Lesley packs a great parcel doesn't she? Your goodies all look lovely and your new bag and cards are gorgeous too!

That Lesley makes such scrummy stuff doesn't she? (Pssst, keep it to yourself, I'm not one to pass on gossip, but she is the Queen of Gussets :-D )

Your bag is wonderful, no wonder you're keeping it. I must 'do' a bag at some point.

By the way, I haven't forgotten about the rabbit - it's just life went all 'aaarrrrggggghhhh' and I'm very behind.

Gorgeous stuff Kaz. Lovely idea to do a PIF like that.

I do love visiting your blog Kaz!
You always make me smile with your messages and your crafting is so varied and all so beautiful.

What a lucky girl you were darling! First time I have heard of pifing as well though hee hee

Hi hon...just me pifing around to see if I can leave you a message with my name highlighted!!!

Can I point out that the idea of a blog PIF is so that you can use your own blog to pass the kindness forward?

If you don't have a blog of your own, you can't actually do that, can you?

I've noticed that a couple of comments here are from non bloggers, so they can't really qualify.

Sorry if my comment upsents the non-bloggers but it's only fair after all isn't it?

Lucky books and lucky me, I was wishing I was sitting in the sun with the monkeys but it is better here finding out I can join in your PIF. I have never done this before, it's a bit nerve racking. But here we go, another new experience