Today's DCM is to use beads on a card however you like. I needed to make a get well card as a family friend, who also has ME, is having a hip replacement this weekend the poor thing. Ever since she's had to use crutches to help walking, her ME has got worse due to the extra effort needed to get about. She's really looking forward to getting it done, even though the physio will be tough. So I thought I'd do a girlie beady one for her. 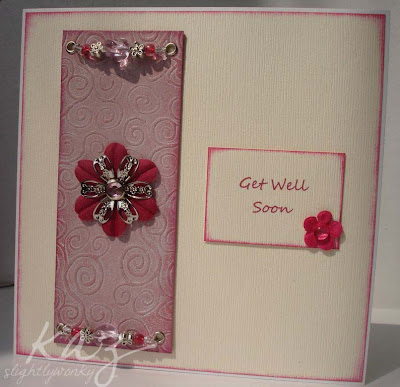 I've used a bit of swirly grungeboard that I've coloured with inkpads, beads and other bits from my stash.
I also had to make a thank you card so I used the papers from the kit. The birds were by far my favourite part of it, so I used the chipboard bird and used some text paper that I have, I think it's 7gypsies, and the bazzil card from the kit. 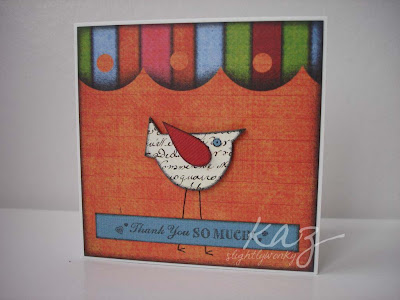 In fact I like the text paper effect on the chipboard so much that I've done a couple of chip flowers ready to make something else!!
Posted by Kaz at 21:15

I'm sure that your beady get well card is going to cheer your friend up no end Kaz. The beads look great but I really love the way you've done the flower.

Kaz the red flower with those silver petals are stunning. Are the silver bits beads? If so where do'you get them.

Love the grungeboard too.

These are lovely Kaz. The Bead card is really classy looking and the little birdie is so cute. I haven't touched my kit stuff yet - expect for the chocs of course and I even have one of them left.

Janice, that's criminal!! Get it down yer neck now woman!!

Tracey, the silver bit is a brad and I've stuck a prima flower behind it.

i love your bead card kaz,very sweet :) and you're right about the wording on the chipboard,looks great :)

Fab cards. I am sure your friend is going to love the get well card. I adore the colours of the thank you card, so rich.
Anice xx

Love the bead card Kaz. The bird card is fab, and I love the way you've covered the chipboard birdie.

Both gorgeous Kaz! The beads look lovely strung like that and the little chip birdy looks fab with the text paper, you're right!

A very pretty card Kaz. I must stop looking at my grungeboard and use it!!!

The thank you card is gorgeous and the bird looks so right covered in wording. I am still in the stroking stage of that kit!!! X

oooooh pretty beadycard Kaz - your friend is sure to love this.

Beautiful card Kaz and love the birdie one as well

Gorgeous cards - as always. That birdie one is particularly lovely. Hope your ME friend's op goes well for her - can't imagine how hard it's been for her. x

this is bound to help her on the way to recovery, so cheery and sophisticated.
your kitcard is lovely as wel and now I know what to do with the birdies., thanks

Beautiful cards.. came here to see your beady one which is really pretty btw, and love the birdie one so much....but what cute little bunnies!! :)