It's been lovely here this weekend, which means outside photos so hopefully the colours will be much better than previously.

I did the {DCM} dare today which is AD-dicted

I want you to browse the tv and magazines for advertisments and use them as inspiration. It might be the format, the colours, the products, the slogan - whatever floats your boat.
Well I didn't use a mag as I had bought the Melissa Frances vintage cut out sheets last week (see all this buying is very good!)! I combined them with the sugared BG papers and a bit of the lace I got last week too. 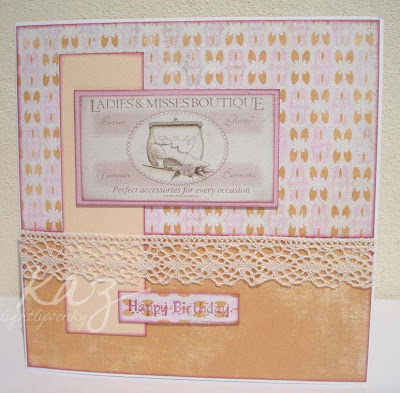 I managed to get Tony's drumstick bag finished yesterday after a little hiccup with the thread. I started it, but ran out of black cotton and I thought I had a reel of it, but it wasn't with any of my sewing stuff, so I had to order some more, and well it seems silly to just buy one reel when you've got to pay P&P (I don't have a car and only rarely make it to any shops), so I got 20 reels in a pack from ebay! And oh my they are lovely colours!! I haven't been a total saddo and take a picture of them though.

Anyhooo when I told Tony I had to wait for more thread, he wasn't happy as he isn't known for his patience (only teasing, it's a big joke with us). Later that evening, I happened to look through my knitting bag and what do I spy? Yep, the black thread in with the sock monkey that I took to Lynne's to finish, but never got round to doing. I was ggrr as I had it all along and laughing because I knew exactly what he'd say (and I'm not repeating it here).

So here it is complete with the monkey face he wanted on it. 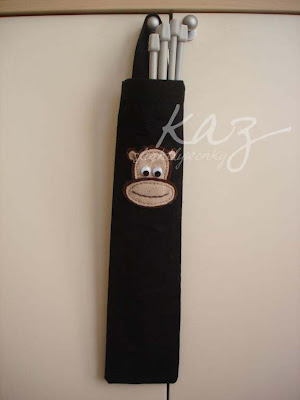 Seeing as it's been so nice here, I've been out in the garden doing a spot of gardening. Actually that really is a bare faced lie as I have a small, but completely paved garden with a few pots with plants in and I have just been pulling out the dead stuff. But even though it's not a very gardeny garden, there is still a bit of wildlife there. I just spotted these hairy fellas in time before picking them out too (hairy ones make you itch don't they?!)!! 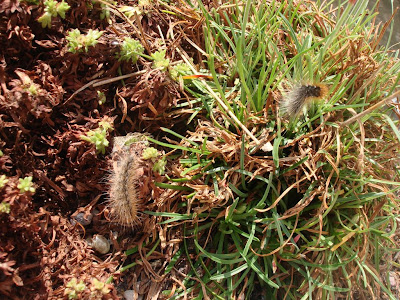 And then there's this collectiong I spotted today, they are only about 1mm in size each, 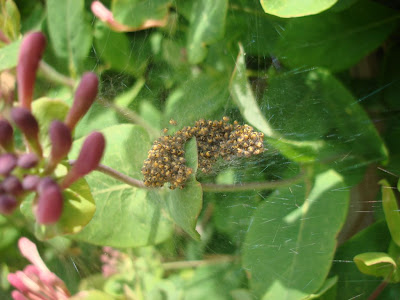 I'll leave you with something much nicer though. Lynne sent me these orchids to thank me for being there for the girls when Andy was away. You're mad Lynne, I loved it and it was no problem we had loads of fun. 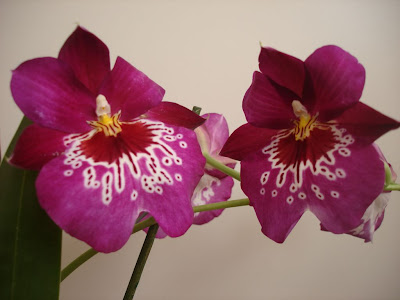 Gail Is This Mutton? said...

Love your Ad-dicted card. Lovely soft colours and the lace is great. Your blog made me smile...I failed my art O level too and didn't lift a paint brush until about a year ago!

Fab card, very girly! Love the drumstick bag too (although those looks suspiciously like knitting needles to me - I hope Tony won't consider it contaminated now!).

Fab rambling Kaz, makes me feel better about some of the rubbish I write on my blog hee hee hee.

I just lurve the drum stick thingy. I might have to commission you to make one for my son, the monkee is a stroke of genius!

What a lovely card!

I love your card Kaz the colours are so nice together, very pretty.
Yes very strange looking drum sticks, definitely look like knitting needles to me!
Sue x

I am sure Mr D is gonna love that "Knitting Stick Bag" complete with its own little monkey face:) Its fab. Take care of the orchids, they are beautiful. I got out in the garden a bit this weekend, planted some geraniums in tubs and now have a very sore "glutinus maximus"

Love the card, Kaz. Oooh, and the gardening I do a lot of gardening like that too! xx

Tony's drumstick bag is fab and I love the monkey face!! So glad I'm not the only one who finds what I'm looking for just after I've bought a replacement!

Your card is gorgeous. I love the papers you've used.

Nice creepy crawlies you're cultivating there :)

Love your card, love Tony's knitting needle bag, love your orchids and love you too X