Guess where I've been?

I've been to see the bunnies, oh and my sister and family lol. Aaww those bunnies have grown loads, which isn't surprising seeing as they seem to eat all the time. They even try and eat your clothes. 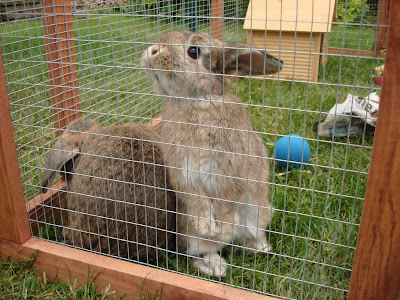 They love their run too. Mopsy is on the left (I can tell them apart now) with the not-so-floppy ears and Pepper is the one who's flat out! 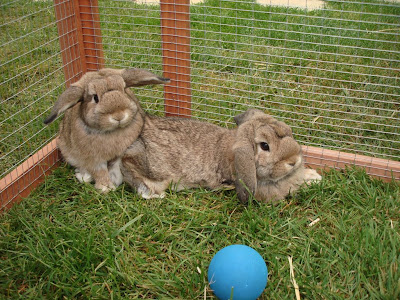 Now that they run about during the day, they come inside and have some fuss and grooming instead.

Pepper just looks massive in this picture with Rach, she's not quite that big as she's curled up. She's the fidgety one and likes to climb all over you. 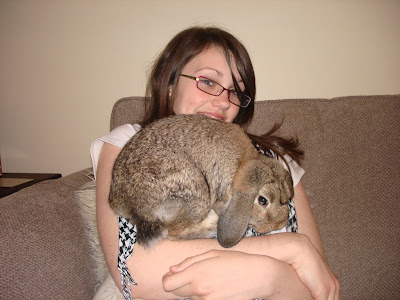 Mopsy is quieter generally, but she's the one who throws a strop and thumps when you try and pick her up to move her. Lucy loves them to bits as you can tell. 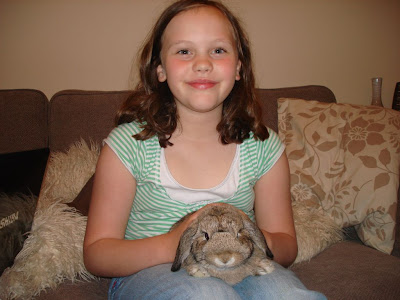 And of course I can't finish this post without showing you Vincent in his new home. He was very excited when we got here and couldn't wait to get out of the car. 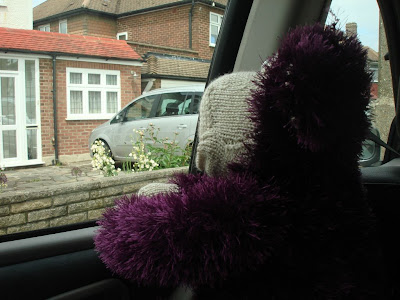 Lucy doesn't mind the compromise in his name, which is Dorito von Vincent van La La (he's kept his antenna).

However, he got a bit stuck trying to climb with Cheeky (who I had to rescue. You should have seen the way he was tied up) and as far as I know he's still waiting for the firemen to come and rescue him (aren't we all?!) 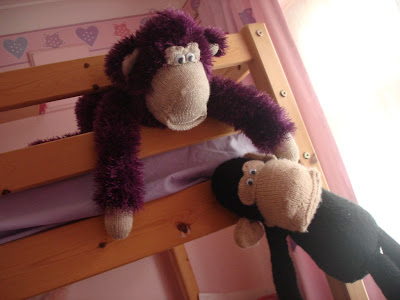 I shall leave you with Rachel's opinion of me. Apparently all of my family think I'm insane due to the monkees. 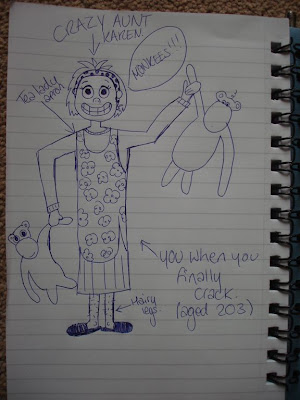 Did you notice she put Vincent's antenna on ROFL!!

I know they're just monkeys really. Well, Vincent is. Cruella isn't even a monkey - just a figment of my imagination.

Sometimes I think I need to get a life.

what a great post kaz,you always make me laugh :)
great pictures of everyone ;)

Rach has so got you right hasn't she, except you don't need to wait till you are 203 LOL.

Awe those rabbits have GROWN!!!! They are so gorgeous! As for Dorito Von whatsit...I am not surprised. I have the same probs with my two!!! LOL X

The girl has talent - great drawing from Rachel! Glad Dorito von V van L is settling in to his new home, he should probably avoid those rabbits though, they look a bit hefty to me!

I do so love to read your blog Kaz. Always something to make me smile. Keep it up girl!
Sue x

Haven't been on your blog for a while, (blog not BOG lol). Love reading your news Kaz. Love Vincent, such a brill name. The drawing from Rachel is brill, made me laugh and those BUNNIES are very adorable and squidgy. XXXX

Your blog made me laugh, the drawing is soooo funny, can't imagine you really look like that !!

Loved the bunnies. Keep up the funny blogging.

Thanks for cheering up a rather grey day with your wonderful post Kaz!

Love it! Especially the pic of you in your pinny and slippers at 203. I'm really impressed you've still got teeth and hair. Give the bunnys a squidge from me they're gorgeous.

Your family and mine too..insane.. what do they know. Oh how the bunnies have grown,they are adorable. Rachel is a artist in the making, the likeness in her drawing is uncanny.

those bunnies are so cute!! and love your 'likeness'!

Well, you look really normal to me and I can totally relate to the hairy legs!