First off, for those of you who were concerned about the knitting/drumstick bag, here's a photo of it in place, doing what it should - although the same can't be said for the eyes!! 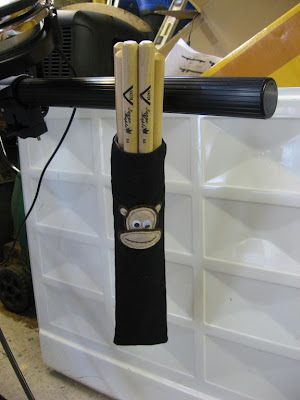 Secondly, I had a parcel arrive today that I wasn't expecting. My friend {Karen} had sent me some wool and asked if I'd knit her a monkee {here} which I did, eventually, and Karen sent me this package as a thank you - which was daft Karen, I did it as you're my friend, but I have to say I'm very pleased you did!!! 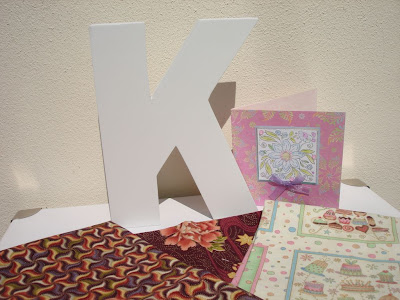 I shall be altering that big K next week I think and it will be in my craft room once I get the damp sorted out and it redecorated and some shelves put up. And look at the scrummy material (I love that one with the cakes on)!

Lastly here's a picture of Quentin, with his bag packed ready for a new home. He isn't going in the coffee morning now, that place has been taken by the black one mum knitted, whose name is known only to Lynne who chose it and myself.

Oh no, Quentin is destined for higher things. A couple of the girls on the Bubblyfunk forum asked if they could join in and try to win him/take part in the raffle. Which made me think that they might not stand a chance of winning much and what would I choose for them? Plus they knew his name! So I decided to do a raffle solely for the girls, separately, and Quentin is first prize. Now I have to say that there have been slight attempts at swinging votes mentioning no names Tracey!!! Tracey sent a note with her cheque saying, and I quote 'his name's Quentin, do I win him?'

I said it'd be 50p an entry and people wrote the cheques directly to Action for ME, who will be getting all the money from tomorrow, and between them - and I would like to point out that we are only a small forum group - they raised £73.50!!!! So thank you, all of you, you're fab.

Dad is drawing the tickets tomorrow and there are a few other bits and bobs going in that raffle only. One prize is the bag that Quentin has, which may involve a bit of a fight to get it off him, hopefully without too much fur flying! He says man-bags are in. I'm really going to miss his little green face. 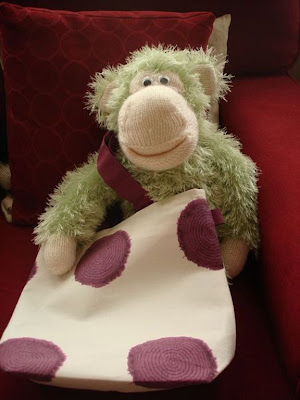 How come it takes so blinking long to do a post?? Thank goodness for Sky+!!

Oooh, lovely goodie bag from Karen there - make sure we get a squizz at the tarted up K, won't you?!

Tell Quentin that the purple splotches clash with his fur and he'd be much better off persuading his new owner to get him a Radley ;o)

Hope the fund-raising goes well tomorrow and you get at least as much per capita as the BF raffle bagged for Action for ME.

Woo hoo! Glad you made so much for the cause Kaz! We will be waiting with bated breath to see where Quentin's new home will be.

Excuse me for mentioning it but Quentin's little green face that you are going to miss looks pinkish to me, have you changed the knitting pattern for the face cause your hairy ones faces are getting better all the time and mine are getting worse!!! Tell me your secrets NOW. The drumstick bag now looks like a lethal weapon! What a great result from your BF friends. Enjoy tomorrow.
Bug Hugs

Quentin is so gorgeous - I hope he gets a great home!!! Love the drumstick bag too! Lucy x

OOh Joanne says that Quentin should have a Radley!!! I've got Radley bags Kaz, can I win him please? Can I, can I, huh??