The coffee morning yesterday was a success as about 40 people turned up, mostly from mum's retirement club, with a few of my friends and one of the people I met at the local ME service group. It was fantastic weather as you can see from the photos, so everyone was outside. I don't mind feeling like crap today as it was worth it!

This is the bottom bit of mum and dad's garden 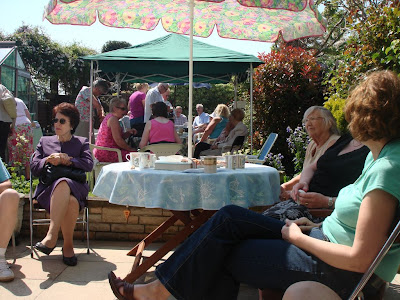 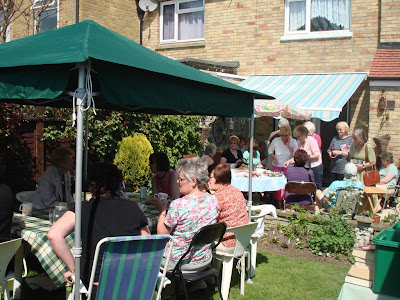 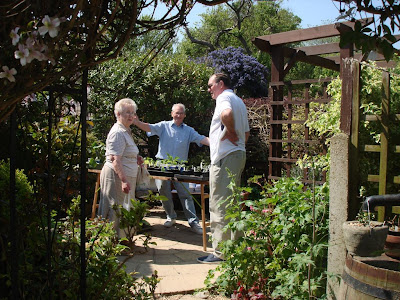 We raised £250 yesterday, so with the money from the forum raffle its a total of £323 if my maths is right!

Sadly the 'name the monkey' didn't go quite as planned as we had too many names and we couldn't get the list filled, and of course the name itself wasn't chosen!! So I ended up closing my eyes and sticking a pen onto the list to get a name that was chosen! I think that if more people were aware of how much fun you can have with a monkee made of knit, there'd not have been a problem. So instead of being called Trevor, he is now known as Buster.

Once everyone had gone home, I did the forum raffle with Helen and her mum picking the names. It turned out that Quentin is now going to {Karen's} to be reunited with Claude as he is now called.

Here's a pic of Trevor and Quentin helping Claude into his postal bag. I hope Karen is prepared for having two monkees. 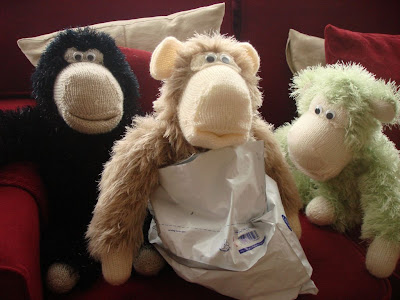 Sounds like it was a great success!! Nice to be 'normal' every now and then (I know you'll know what I mean by that)

Congratulations Kaz on such a wonderful amount you raised!

Looks like you had fab weather for it - well done on raising so much, great job! I'm sure Buster will be happy whatever he's called!

I'm glad it went well and you raised a lot of money - well done.

well done,what a great amount you raised :) glad the weather held out for you.

your parents have a fab garden Kaz! Am so pleased that you raised so much money for such a good cause darling. I have to say that Trevor/Buster looks very cross in the pic and Quentin looks like he is going to cry. Just as well he is being reunited with Claude!!! X

Well done Kaz and your Mum and Dad, it was a wonderful achievement. Hope Trevor/Buster enjoys his new home and I hope you now get lots of rest and soon feel a little better. Jane x

shame more of your friends couldn't join in the fun. Glad you had good weather for it as this tends to help things along a bit! Maybe next year you could do your name the monkey for the National ME Society and they could raise a lot more for you with help maybe? The Mcmillan coffee morning idea's with a large sheet to be filled in could work ? Good luck as charity fundraising is hard work with new ideas and new people coming along all the time! Great blog btw!

What a party, I so wish I could have been there. Well done for raising all that money. The Hairy one going to Karen is gorgeous. A great big thanks for sending precise details along with pics for sewing the mouths. If you could have seen the positions I got into looking at the pics you would have needed your tena lady :) And I actually think (perhaps) I know what I am doing now, at least I will when I have shown the pics to Gemma :)

A mahoosive well done Kaz!! It looks like a great day and you raised a fantastic amount of money!

Enjoy your rest and I hope the naughty monkees give you lots of hugs :)

You are a star!

Said i didn't win the monkey but glad he went to a good home...xx

So glad you raised plenty of money - well done Kaz..xx