It's been madness here this week and I shall be glad when it gets to Sunday and I can bugger off to my sister's while the back room gets done. We've been gradually moving the bits and pieces from that room into the kitchen and tomorrow dad will be moving my desk etc. I can't wait for it to be done now.

Also this week I went with mum and dad when they took nan to the home that they have put her name down for. My nan is 93 and crippled with arthritis, but apart from that (and having a 93 year old memory) she's doing really well, but the time is coming where it's safer and better for her to have more care than mum and dad can give.

We knew of this place, but thought the waiting list would be long as it's so nice. However, when mum and dad went to have a look, it wasn't too bad and as the place was fab, they put her name down straight away.

Anyway, nan loved it, and really who couldn't when you look at the gardens..... 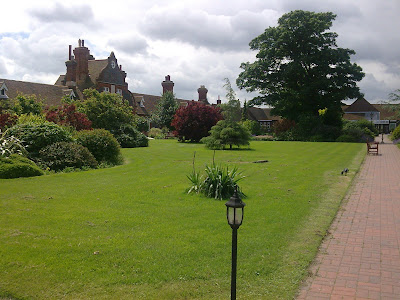 The place has cottages that were Alms Houses and a purpose built home surrounding a square. The home is lovely and clean and non-smelly, and to be honest I wouldn't mind living there. They even have a craft club!!! On the wall in the dining room are three huge hanging quilts that some of them have made as this year is the 300th anniversary of the first cottages being built. One part of one of them has an amazingly detailed view of the clockhouse..... 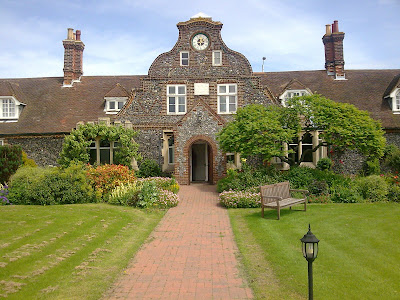 I did ask if I could put my name down for one of the cottages, but apparently you have to be 65 - and feeling it doesn't count!!

Nan will be having her respite care here later in the year when mum and dad go on holiday. There's just no way you can predict how long a wait she has before she moves here for good, but nan said she thinks she'll be really happy there. Plus as a bonus, she knows a couple of the women who live there already and a couple of the staff, as did mum and dad so it took an hour and a half to look around and have a cuppa!! Needless to say, I spent yesterday and today flat out on the sofa, but it was worth it to know that nan isn't so frightened by the thought of moving.

So there's just time to show what I've made for dad for Father's Day before my dinner's done (I got leftovers from mum and dad's dinner yesterday).

When we were children, dad used to play in a pipes and drums band and absolutely loved it. Lynne and I were less than impressed when he played his albums, but we should have been grateful that he played the drums and not the bagpipes (sorry Janette and other Scots, but it's just not for me). When the band broke up, dad got us to write to Jim'll fix it so he could play with one of the big bands!! Jim didn't.

Then dad set up another band and played for quite a few years and was very proud of what he did. So I thought I'd make him an album to put some of his favourite photos in. 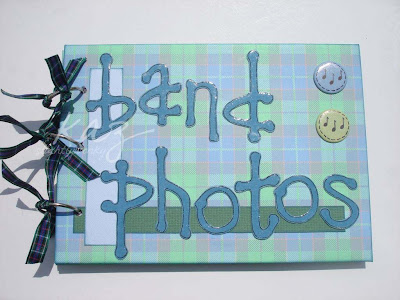 Here he is in all his finery after playing at a Rembrance Service in 2000 - he had progressed to drum major by this time so had extra bits on his uniform. As far as I know we have no Scottish history. 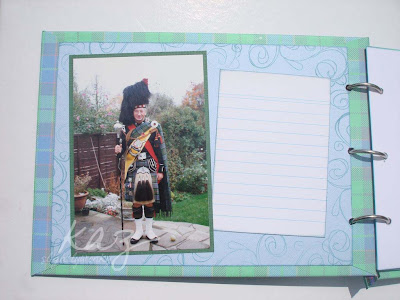 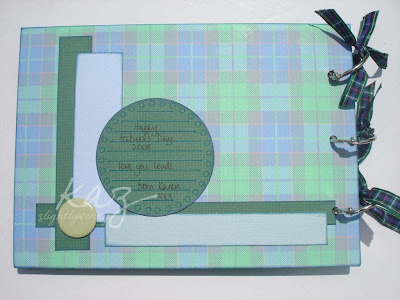 So that's it for now, I might even get around to doing a bit of blog hopping later.

There will probably be bunny shots on here next week, I can't wait to see them again!! Yeah and I guess I'm looking forward to seeing my family too lol!!

What a lovely garden view - it sounds ideal for your nan - hope it won't be too long before she can settle there and meanwhile hope the respite care time goes well when it happens. Love the album for dad - how proud of him you must be

Kaz the book for your Dad is excellent he will be well pleased with that. You are a lovely daughter. :)

Wow ... I want to live there too. Actually, I went to look round a care home place with an oldie recently - bloody hell, it was gorgeous! That one looks particularly lovely.

The book you've made your dad is superb - I'm sure he'll love it. If he doesn't, just thump him.

What a great book Kaz. Being a Scot doesn't necessarily make you keen on the music, pipes outside are quite impressive, but I wouldn't want to listen to it on an album (eek)!

How lovely to have been able to find a good home for your Nan - it's never an easy thing to do.

And the book for your dad is fantastic! I hope he loves it!

That place looks wonderful, Kaz, when you see some of the concrete block Old Folks homes that place looks like paradise!
Your dad looks amazing in his marching stuff. can he still twirl his baton then..............hehehe

It does look lovely Kaz and I hope your nan will be as happy there as mine was in the one she lived in when she couldn't cope on her own any more. The book for your dad looks excellent, I'm sure he'll love picking out photos to fill it!

Thats a beautiful home Kaz....when are you puting our names down hon????

Bet your Dad loved it. And he wears a kilt as good as any Scotsman :) A Kilt Mr Annon, not a skirt :) Have a great time at Lynne's and put me down for one of those cottages, I am sure if you explain about us being "special" they will make an exception re the age thingy.

Wow, that home looks fab!! What beautiful grounds. Your Gran will be very comfy there. Where do I sign up?

OOOooo, that photo book for your Dad is grand. I'm sure he will have a great time filling it with happy memory photos. You are a good daughter.

That home looks really special and such beautiful gardens - I do hope your Nan is very happy there :)

I love your Dad's book. I did one for my Mum's 70th and she showed it to EVERYONE!! I'm sure your Dad will be just as proud of his book too :)

Hope you have a lovely week with your family.