First off, I'll show the DCM card for this week's challenge, which is to incorporate a quote on the card. 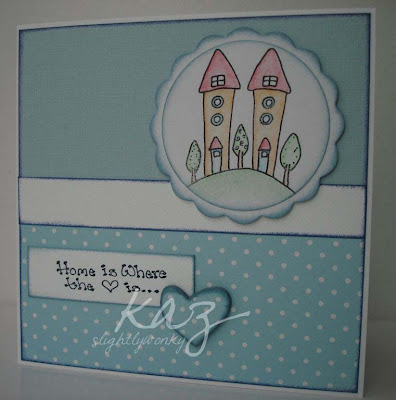 I've had the quote stamp for ages, but have never used it, so now I can see why I got it!!

The house stamp is by onefourzero and I used watercolour pencils for it. They have loads of funky stamps.

The heart is by Maya Road and the paper is American Crafts.

Now onto the goodies! I had 3 parcels this morning, it was like Christmas! One packet contained zips and velcro so really not that interesting, but the others were scrummy.

The first one had sweets in it (my kinda parcel) and I had every intention of donating them to my nieces who were here today, but when Lynne picked me up, the kids stayed in the car and I forgot them!! Honest I really did think about giving them away. The only trouble is, when I got in this afternoon they were begging me to eat them and not send them in the post as they had travelled all the way from Oregon USA and they would rather sacrifice themselves to me than go back into a parcel. So I did the honourable thing and stuffed them. (I have 3 packets left but I give them till 8.30pm!) 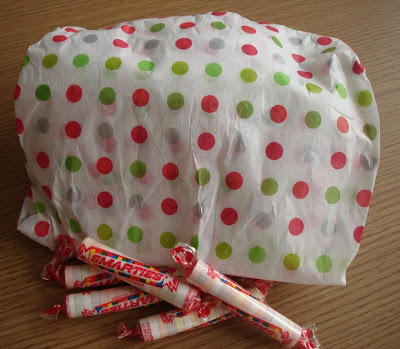 Let me introduce Olivier, who I received after doing a monkey swap with {Chris AKA Stine}. He really is a cutie and I'm sure the others will let him share their chair. I'd taken a photo on my phone to show Tony as I couldn't be arsed to put the lappy on to email him, and when I showed Lucy, she wanted him. I knew she would, she's a little magpie, but no, he's staying here. I have actually bought the pattern for this monkey, but when I read that you do it on open ended needles, it scared me too much to have a go. Chris has already offered to help out when I do get round to it. 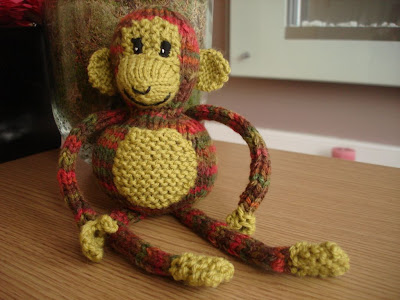 And now I ought to show the one that I sent to Chris. I knitted this monkey a while ago, but because I can't stand sewing them up, it had remained in pieces until the swap made me do it. I have plans to knit a hairy one of these as I have a feeling it'd look good. Chris has called him Gordie and here he is lounging about before I shoved him in a box!! 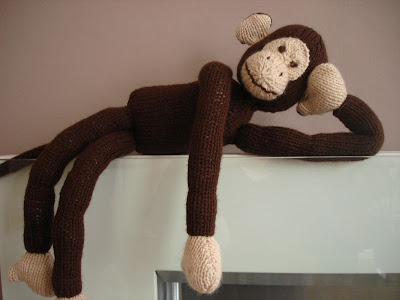 The third parcel is some goodies I ordered from Bubblyfunk yesterday!! Fabby service or what? It's some new chipboard from Australia, which apparently is only available at {Bubblyfunk} in the UK at the mo and I can't wait to get started on the robots and owls, but I only have this week left before everything has to be moved so it might not be just yet. 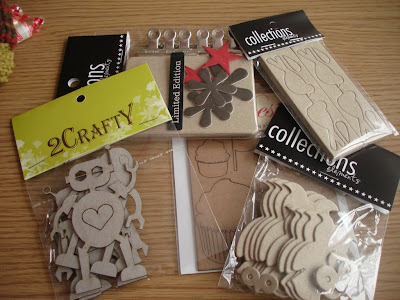 I'm so glad I looked at your post Kaz, because now I don't feel so guilty about buying extra stash from BF - you bought way more than me!!! Very lovely, as is Gordie, he is so cool. Olivier is a little different looking, but then diversity and equality are the spice of life, go on have a go at knitting one.

Awww, how sweet is that variegated monkee? Love it! I can help out with double ended needles, too (assuming we're talking about the same thing- point at each end?). Best thing for those of us who hate sewing up, you'll love 'em!

Great DCM card too, lovely homey feel to that one.

I've nearly finished my monkey for Chris ... feeling guilty for being 'behind' *blush*

Love that pale blue card - it's so pretty. x

Monkey Swapping is great fun!!! Gordie is settling in very nicely with the other monkeys on this side of the pond - they really like his accent. I just hope the monkeys at KAZ's can understand Olivier.

Nice card with the houses!

Your card is very pretty too, I love that stamp too.

I keep coming back to look at these two new monkeys. Olivier is the cutest monkey ever. What are open ended needles? Am lovin Gordie, he is one cool looking dude, he will have a american accent before you know it :), Have had a crap week but will try and phone soon, keep on knitting
Bug Hugs
Janette

Great monkeys Kaz, and I agree, you were very honourable to eat the sweeties rather than consign them to another journey through the post - that would have been sooo cruel

I got a Bubblyicious parcel on Saturday too!

ooops, forgot to say - that card is fab, I love the housey stamp and the way you've put this design together

Gorgeous goodies Kaz! I love your monkeys and how great to do a monkey swap!!

I can't wait to see what you do with those fab little robots :)

Fabulous card! I just love the colour - right up my street!!

Love the card Kaz, lovely blue. I adore those monkeys! I want one....x