A few more things what I have been making!!

Well I am still alive!!! I've still been a bit less than the usual crap and I don't think this big abscess I've had has helped, but it is finally shrinking so gingers crossed lol.

I've been busy making birthday cards for Rach and Lynne, and anniversary cards for Lynne and Andy. I've bunged them into a collage to save time!! This first lot are Lynne's cards and also the new canvases I made for my living room using a remnant I got months ago.

The patterned papers are all basic grey. 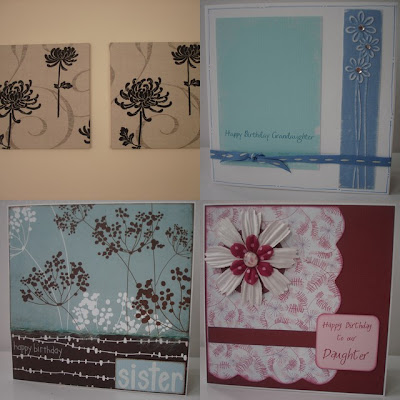 This next collage has Rachel's cards and the anniversary ones. 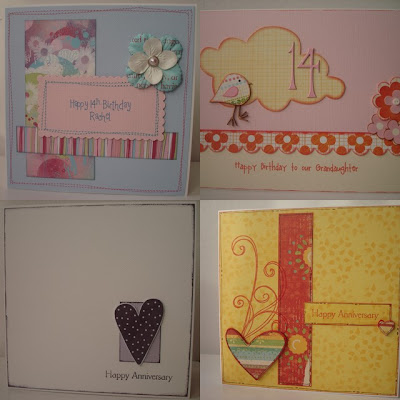 I've been at Lynne's again while Andy was in America for when the girls got in from school. I seem to have spent most of the summer up here (I use the term summer very loosely) but it's good to spend time with everyone, although the last time was to bunny sit while they all swanned off on holiday. It was a good thing to do though as I have been twittering on for a while about getting a pet, but it was too much to do it permanently. One day maybe.

Really gorgeous cards Kaz!I love every one of them! :)

Lovely to see you blogging again Kaz. Love the cards and your canvas.

Those canvasses and cards are just gorgeous lovely. Glad to see you back and hope that 'owibbul' norty toof is on the mend soon. What are we like love, lol. XX

And we all know you just love that bunny (and niece) sitting!

Your cards are, as always, simply gorgeous.

Sorry to hear you've been worn out - boy, can I relate to those aches and that exhaustion!

PS How about a hamster as a pet? They don't wear you out ... unless they escape, and then they give you a heart attack.

Hello you!!
Your cards and canvasses are gorgeous. You are very clever, y'know?!
Very naughty to tell me they are Basic Grey papers, as that's just too much temptation for a BG fan like me!

Good to see you back xxxxx

lovely stuff darling!!! How about a couple of dwarf hamsters...they are hilarious or maybe a snake hehe!!!XXXX

Fab assortment of goodies - love em all! The B&W anniversary card is so sophisticated and stylish, love it!

Hi Kaz, nice to see you! You've been busy - all such lovely cards! Glad to hear you are on the mend a bit now. xx

Kaz you have been a busy bunny.

Some very lovely items there.