Better late than never for March and April

Here's my March pages for the ~{365 Journal via Kate's Blog}~ and I can't quite believe we're a quarter way through the year already.
It's been an up and down month while the kitchen was being fitted and it's just the little fiddly bits left now!!!! I am loving it sooooooooooo much and it has really made a difference to me. I'll put a pic on here when it's finished as the chimney hood is causing a few problems and it doesn't look too good still!


By the 3rd time I used ~{5165 grrrumpy dog}~ I thought I needed something different to a hat so I used the hair from ~{9092 art angels}~ instead. He looks extra grumpy with that on! 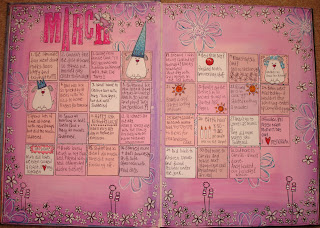 It was lovely to stay at my parents while the chaos was going on as I got really looked after. It was also fun to be there when mum's cousin's came round for the afternoon -see the 3rd!!!!` See it must be in the genes and how I am is nothing I can control!!!!! 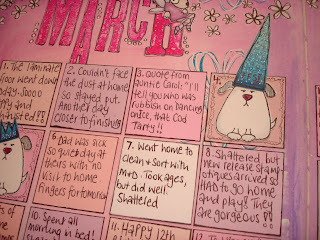 As I love the new mermaid stamps by  ~{Stampotique}~  I just had to use them, so the background was made using Dylusion inks and lots of water. The April is stamped using ~{Altered Alphas}~
I've then added a load of doodling - yawn! 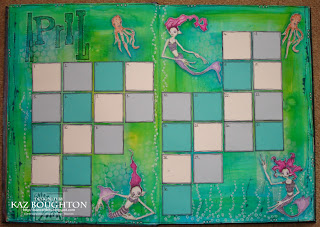 Oh wow, love your pages. The April ones are stunning. Your handwriting is so neat!

Fab pages - poor old grumpy dog with the Kevin Keegan perm though! Love the watery colours and theme of your April pages, hope Grumpy gets a bit more of a restful month this time around!

Fantastic pages! Love the April background, great colours. Plus the doodling was worth your patience - it adds great definition :D x

It looks lovely Kaz. The mermaids are quite surreal.

wow Kaz the April pages are very "under the sea" - loving the colours and the doodling is not a yawn!

Love the little stick people on the March pages too.

oooh Kaz.... you're pages are as always amazing!!! loving the grumpy dog with hair, he's so special!!!! cant wait to see more xxxx

great idea Kaz, this is an unique calendar.

Love your calendars, Kaz. They are always so fun and funky with beautiful backgrounds! And those goofy dogs and their hats!

Lovely pages Kaz, i really love the new mermaids and they look brill on there x

Such fabulous pages love the stamps you have used and the colours are gorgeous.