Yep I have made not 1, but 2 Christmas cards!!
Don't worry though, normal Bah Humbug will resume tomorrow!

Last year I commited the number one crime of the cardmaker; I bought Christmas cards! And, after Christmas, I bought some in the sale for this year! And I don't care and am very happy with that. So. There.
However, there were a couple of new Christmas stamps in the ~{New Release Stampotique's}~ so I thought I'd go for a couple of quick cards using the same layout so I didn't have to think too hard. 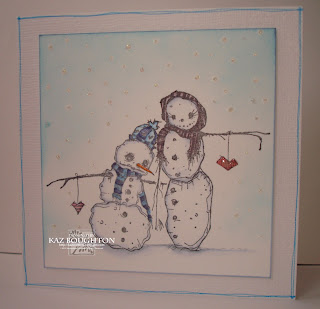 On this card I used the new ~{Snowy Fran}~ alongside ~{Snowman}~ and a couple of heart shaped baubles from ~{Hanging Hearts}.  I've masked the stamps to form a 'scene' and saved myself a lot of cutting!

I love Daniel Torrente's characters, but I know a lot of people don't and that limits who I could send this card to, but the new releases included a cuter snowy scene by Janet Klein, which would appeal to more people. 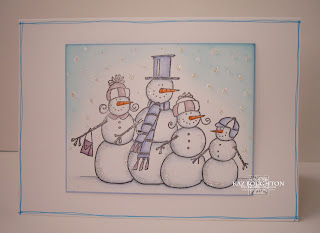 On this card I've used the new ~{Snow Family}~.

There is minimal colouring on both cards and I've used Copics which makes them lovely and quick. I've used Viva Decor Glitter Liner for snowflakes as this gives great dimension. Once dry (which is the only thing that takes any time)  I've added a little bit of Tumbled Glass DI and drawn a frame.

very beautiful cards !! I love them !

I love both of them for different reasons, but particularly like the snow family (I need to put that on my wish list definitely). Your cards are just right for my CHNC challenge this week - would be lovely to see them linked there. x

These look great Kaz, fab masking on the Torrente characters and the little family group is sweet!

brrrrr very frosty and festive Kaz - I love it. :)

What a lovely winter cards

i like them both kaz,they're both cute in their own way :)

I absolutely love your Christmas cards! They are so fabulous!
Kindest regards,
Jennifer