I really wasn't anticipating making any dare cards until Friday due to recovering from being away, however Lynne happened to mention she has got an award from work. It's for visual initiative of the year for the work they did in South Africa a couple of months ago. She's playing it down, but I'm proud of her so I had to do a card for her - how could I not?!
I've managed to combine both last Friday's dare, which was to use beads, and yesterday's cartoon dare. 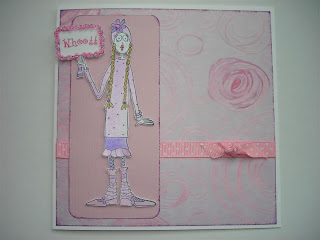 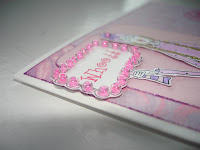 I used the Miss Behave stamp from stamps happen and blanked out the writing, replacing it with some printed on safmat in love letters font and sprinkles paper from blonde moments. I've stuck some beads around the sign following the wavy edge.

The postie brought me some goodies this morning that I ordered while they were on special offer. I really can't resist bargains, any bargains, as I seem to be able to ignore the fact that I'm still spending money I really don't have, for things I wouldn't have got normally. This time I convinced myself that I needed to have more flowers, just in different colours for variety. Most of my crafty stuff lately has been pinks and lilacs, so I got some blues and greens and yellows in the hope of doing something different.

And luckily there's a shade of pink ones that I haven't got!! How scrummy are these? 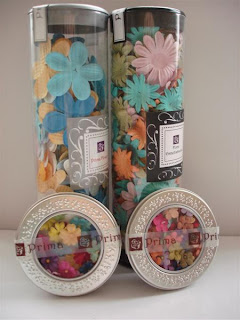 OOh I love that stamp!! And I love your delivery too!!

Too cute Kaz -love it and the beads are just fab too :)

Great card, love the way you've used the beads - what a great way to highlight the message.

Loving those flowers too - you lucky wotsit!

What a fab card Kaz - I'm sure Lynne will love it. Great idea to replace the writing on the stamp with your own sentiment and those beads just make a perfect frame, great stuff!

Have fun with your flowers :)

Just thought I'd let you know I've tagged you, come on over to my blog for the details!

Kaz that card is gorgeous, love that stamp, and esp love how you've used the beads, looks very cool!!!!