There's been a distinct lack of card making going on this week, and here is the reason why: 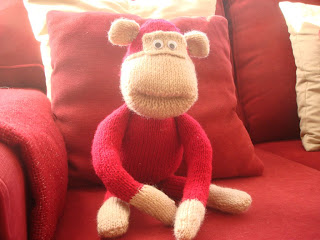 I am pleased to announce the arrival of Wonkey - well there could be no other name for him judging by my 'putting together' skills (or not)!

Once I'd made the nose and mouth, I had to sew the head up to see if it was ok and then it became an obsession to get him finished ASAP! I had some help from General Monkee Maker who is quietly amassing troups of knitted monkeys around the country ready for the monkey revolution. He wasn't that keen on fighting so he tried a bit of camouflage. 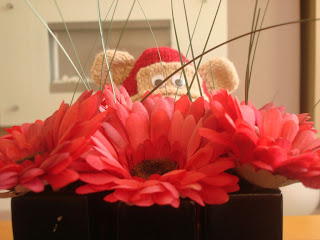 Once I'd convinced him it was ok, he came out and had a mooch around the flat until he found some home comforts 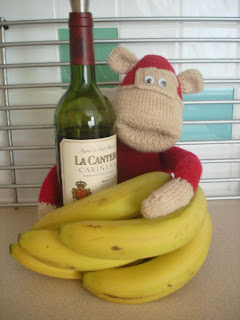 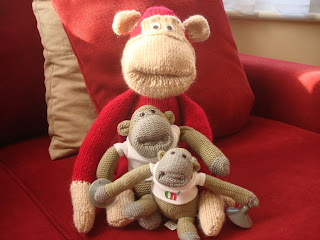 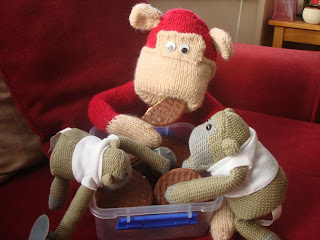 What does wonkey think of ur pet rabbit ?

Wonkey is fabulous!! I'm loving the colouring ..... I think I need a red one now!

So? Have you cast on another one yet??

Arr he is brilliant ,i showed my little girl your pictures of your monkey ,so when we went shopping and brought some tea bags she sat screaming in the trolly because there was no red monkeys lol,and had to have another beigh one lol,thanks Dawnx

I think you and Wonkey will get on very well :)

Hi Kaz, i think wonkey is just gorgeous, you are clever knitting him, i want to try making one next when i have finished Tonys birthday bear. Trouble is i've got a couple of other things to make for christmas gifts.Thank you for your comment on my blog. I love your cards they are sooo professional, i do make my own for family birthdays but they are very ordinary next to yours!

Hee-hee, he's so cute especially with his mates tucking into the choccy buiscits! You are a clever thing for making him.

Hello Wonkey *waves* what a cutie! I wish I could knit more than a miniature scarf!

Rhi, thats the last thing I knitted at the age of 10!! There's a simple pattern I used.

Kaz, these are so funny, and made me laugh. Wonkey eh? Lol, Brilliant. XX

Love him! Want him! LMFAO

OMG Wonkey is to die for! So cute! Love how you have all these wonderful photo's set up! Fabulous girl and thanks for sharing Wonkey with us! :)