I have no sympathy with me

oohhhh I don't feel well uuggghhh! No, I haven't been out on the razz, partying all night and making a fool of myself. I've opened a Christmas present. As usual when I get pressies, I had a shake and a feel and I recognised what it was immediately. Chocolate, and lots of it. Mmmm I haven't had chocolate for ooo about 3 or 4 weeks since I started on weight watchers (don't ask) so this big mega bar was too much temptation, so I opened it and stuffed 2 rows like I'd been starved of any food for weeks!! I'm ashamed to admit to being so gluttonous but it was bloody scrummy!! Until now. And I know that tomorrow, every time I get the milk out of the fridge to make a cuppa, I'll break a bit off because that's what I do. And that's why I have to not buy choc as I have no willpower.


Anyhooo, I've finally finished making stuff for Christmas, well apart from something for Lynne that I'm doing gradually this week, but that's been in the planning/making for nearly 2 years now so it doesn't count. The last card is Mum and Dad's, which I like to leave till last. I'd been eyeing up the Rhonna Farrer Christmas papers, but didn't buy any as I've got so much paper, so when the November kit from Bubblyfunk was delivered I was so pleased to see them in there. The kits always have a little surprise in them that you can't see in the picture. The tree is chipboard from the kit covered in another paper and I used 3 tiny cuttlebug snowflakes. 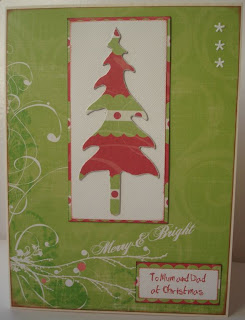 The last thing made isn't this necklace modelled so well by the 2 I'm trying hard not to get attached to. Oh no, I got this from M&S last week to chop up 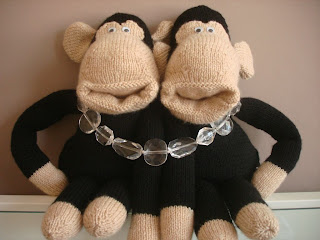 and turn into bag charms 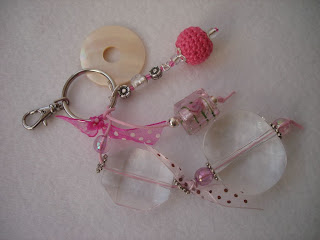 I made 3 and still have beads leftover to use for other stuff.

I'm going to go and lie down now until the nausea goes away, and then I might just have another square. Or two!!

Don't they look cute in their necklace! I like that little wooly, crochet-type bead on your bag charms.

The card you made your Mum & Dad is gorgeous. Methinks I need to delve into that kit myself! How are you going to bear to part with the monkeys Kaz? X

I think the beads definitely work better as bag charms than a necklace, even with the advantage of supermodels to show it off! Lovely card too, nice to see traditional colours with just a bit of a modern twist.

Hope the choccie-nausea soon passes and you manage to limit your intake to a comfortable level over the next few days!

Oh I do understand the self-inflicted suffering from choccie - I'm a fellow sufferer!!