Just the one photo for now!

I'm still without my laptop. It came back on Tuesday after I'd been complaining on Monday. It has now had a new mainboard assembly, new switchboard assembly, new hard drive and new memory and it didn't work at all when it came back. I feel I have to warn anyone who may be inclined to take a job at the Fujitsu Seimens warranty centre that part of their training is likely to include my phone call late Friday afternoon!! I'm normally a very placid person, but I blew my top (and I think my bottom may have gone too)!! I'm afraid I may have let the odd sweary word in (I told them I should have stuck to a Dell as I had no problems with them). It turns out that the warranty is repair and return only, and despite the fact that the parts, couriers and man hours must by now (day 26) have cost them far more, they will not replace it. Instead they have sent it to Germany this time!! I asked to speak to the complaints dept but they would only give me an address to write to. It would be fine if I was working/well as I'd have destractions and would be able to go to the shops, but I am doing my usual weekly catch up at my parents. Oooohh I have to tell you, on the pudding front, we had M&S pain au chocolat bread and butter pudding (like they've got on that awful advert) and it was bloody scrummy. Soooo chocolatey that I forgot I was on a diet! Well that's out of the window at the mo as I'm registered with weight watchers online and I'm having to have comfort food, which is also being joined by boredom food.

It's not all bad news though as I've been getting on with making presents for the mass of birthdays at the moment. Plus I've finished this handsome creature, whose parts were stored in a drawer that had lavender candles in until sewing up time so he/she smells gorgeous. I'm not sure whether its a he or she so it remaind nameless apart from being 'the hairy one'. Twisty is very happy with the company. 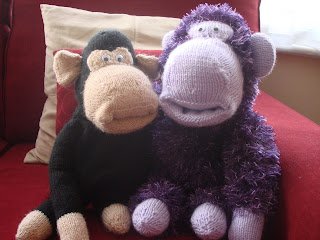 Until next Sunday then lol xxxx
Posted by Kaz at 15:26

Oh dear Kaz - that's really bad :-( Appalling 'customer service' if you can call it that. Yes, you definitely need to do some complaining (and perhaps some compensation wouldn't go amiss either?)

On the plus side, that is one fabulous purpley monkey!

I can't believe the problems you are having with your laptop - that is appalling!

Love your monkey though!!!

Oh Kaz, sorry to hear that you will not be joining us a BF for a while yet, hope you are sorted out soon. You are obviously being v. productive thought - that is one BIG Purple Monkee, very cool with the Chenille finish! I think Twisty is looking a bit put out there, you'd better watch him lol.

Oh, so that shouting on Friday afternoon was YOU!!! Thank goodness for that - I thought it was a stranger with a loud voice! LOL

Love your hairy monkee. Missing your daily input on the BFF though.

Oh Kaz - I've been missing you!!! Maybe we should all petition the stinky laptop people on your behalf and demand you get a shiny new one?
Lovely new fluffy monkee - fab colour!!!

I love your new fluffy monkee Kaz but, the poor thing, when is it going to be sexed and have a name????