Tomorrow we're having a Cyber Crop over on ~{ Bubblyfunk Forum }~ which is linked into the ~{Think_pink}~ blog, as we have been asked to donate a couple of things to the sale Di is having in aid of Breast Cancer Care. I shall be donating the items that I have made for 2 classes. Obviously I can't show them today, so here's a sneaky peek: 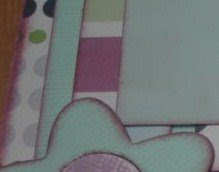 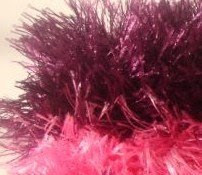 Hhhmmm is that hairy wool I spy there???

Which links me in nicely to answering Monkee Maker and Lesley from the last comments (thanks to everyone who left comments by the way, it's such a compliment to have others take the time to leave them) and yes, I have been making primate shaped things!!

I made this first one during the Olympics, so he has been named Chris Hoy - did you see those thighs?? Same as mine of course, only his are full of muscle and mine are full of choc. He has taken the job of 'guardian of the stash'. And very fierce he looks too!!! 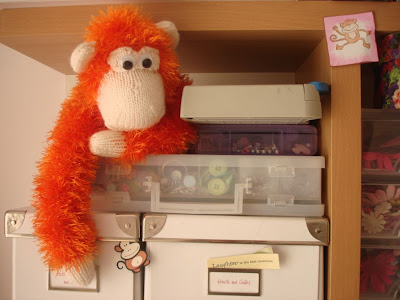 ~{Quentin's}~ little brother was also made at that time and he is being auctioned on the Forum along with Ellie who I made while watching the Paralympics, so of course she is named after Ellie Simmonds. Please excuse the state of the green one (can't be named as he's not finished) as I've run out of stuffing. 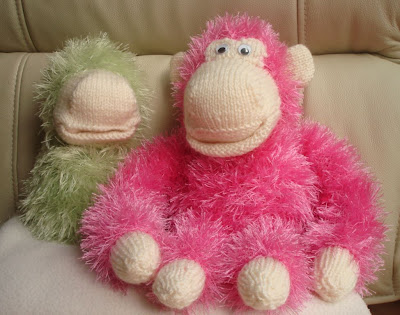 Finally, yesterday a lovely little Bind it All came to live with me. I had thought I'd have one for my birthday, but once I'd decided it would be a good thing to have, I had to have it immediately! I blame Tony as I seem to have absorbed some of his impatience.

Anyways, I had to have a play when it arrived, like you do, and made a little book using the Sept Kit from BF to put card sketches in. 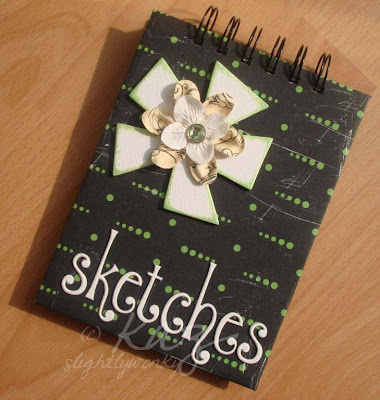 Woo woo, welcome to the BIA world!!! That little book is a fab idea Kaz!!!

you so got the orange monkey thing right - my son would adore that. Good luck with the sale.
Lisa x

Oooh, lots of loveliness here, as always. Those hairy monkeys are gorgeous - so full of character. And I lurve the book - stationery makes me salivate almost as much as fabric!

So does your Chris Hoy have *the* Chris Hoy's thighs then? Can't see with the photo at that angle! Great monkees and intriguing sneaky peeks. Have fun with the BIA!

Am loving the monkees, very handsome looking primates indeed and a beautiful little book. I wonder if these sports celebs know how they inspire you :)
That's not my bed, did you imagine for one minute I am that tidy, it was Gemma's. Had a lovely day (not) university book list shopping with Katie. She does not oficially start uni until Mon but has been in at the students union (cheap booze) for the last three nights, you can tell what kind of student she is gonna be :) Like me, of course not !!
Bug Hugs
Janette

I love the monkeeeeees!!
And the notebook is fab Kaz, as always....x

Does that monkey have my name on it can you check please? Thanks. :)

Lovely monkeys! And the BIA book is fab - welcome to the world of BIA.

Love your sketches book, may I ask what you used to cut that lovely title? Thanks xx