We've done a secret santa over on ~{ Bubblyfunk Forum }~ as an advent calendar, so those who have taken part have wrapped 25 parcels and sent them anonymously.

We have set a budget of £5 maximum so it's all done in the spirit of Christmas and for fun. Most of us have sent little parcels from our own stash and made the one for Christmas Day worth £5 and then enclosed a card with that one to be opened to say who sent them. I am being very restrained and have only opened the ones I'm meant to and not peeked as to who it is. We're all having a guess beforehand as to who we think it is.

This is what I have received so far: 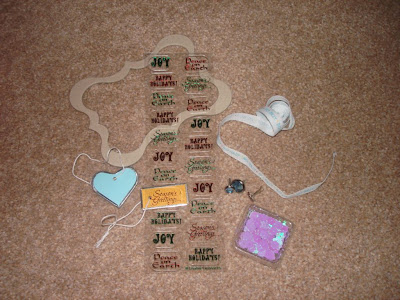 I also had a choc santa today, but he didn't last very long!!

I've still got all these to look forward to: 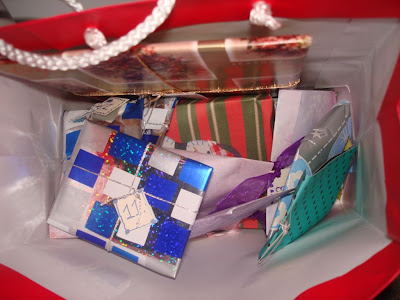 This week's DCM dare is to take inspiration from your home to make a card and after a comment I made, Caroline has dared me to make the card. So here it is: 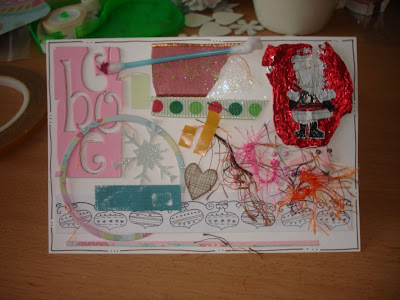 I have been inspired by the mess in my flat! I'm using the excuse that there's no point putting the Christmas stuff away when I'm still creating. The inspiration is as follows:
- strip of baubles - I stamped these as I thought they'd be good on a card, but gave up when I realised how long it would take me to colour them so they are lying about on the desk.
- coloured card on the left - is for a present I've made and am using it for a weekly challenge we do on the forum (I'll blog this on Monday when I've posted on the forum)
- cotton bud, ribbon and scraps of card and DST backing - always lying around on the floor of the craft room
- glitter - I've been using some very fine irridescent stuff and it is everywhere. I had to have an engineer come to fix my printer (yes I know I only got it in September) and he was working on the desk, which is covered in glitter, so he walked out with a sparkly face which made me giggle.
- wrapper from said secret santa choc
- fibres and beads - is for my living room floor, which always has fibres from hairy wool stuck to the carpet and beads.

I don't think I'll be linking this to the DCM site this week!!!
UPDATE: I am linking to DCM just for the laugh after Kathy encouraged me!

Brilliant :haha: This is such a fab idea and I love that you actually did it, perfect snapshot of Kaz's flat, December 2008!

Excellent. If you don't link it, I will!

I'd love to have been a fly on the wall when the engineer got home & he had to explain to his better half why he was covered in glitter & whether she believed him or not!!!! xx

very funny - and btw, "wonky" is my absolute favorite word, I use it all the time!

I'm glad you posted--it's a great interpretation! And a great way to use up some odds and ends of scraps...

I'm glad that you' linked too Kaz because it all looks a bit reminiscent of the way my flat is looking at the moment as well!

I love your inspiration and of course your card.

Your card looks very scarily like my office atm. Still working on those Christmas cards.

yup - looks familiar to me as well!!!! Big question is who are you going to send that one too - lol

Love your card, mine would look much the same with lots of different colour cottons on from my cross stitching. I love the idea of the secret santa, we're doing one at school this year. There is an award for you over at my blog. Jane x

that is the most brilliantest card for the dare. Thanks for daring to link it!

Hee hee - that card is so funny!! I can see where the chocolate Santa went now!